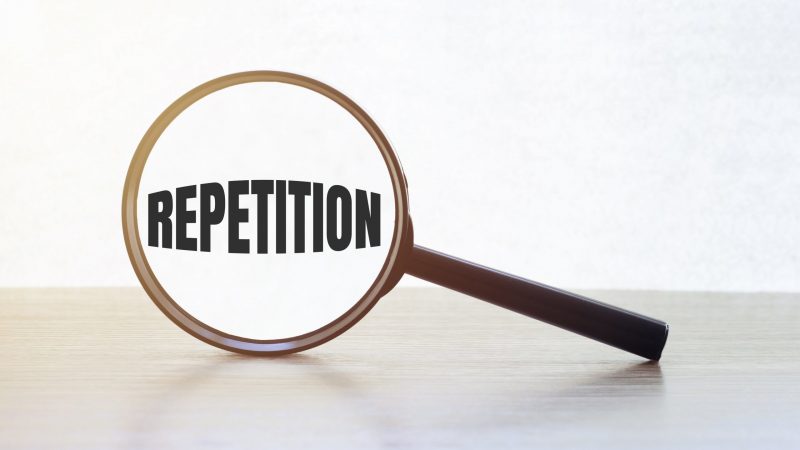 Today’s topic is all about the rule of repetition. There are a few tactics and strategies when it comes to marketing that really makes a massive impact and marketing repetition is one of those.

I like to use the example of children and kids — they’re really instinctive about this whole rule of repetition. It’s like this marketing secret that every child knows, and I want to make sure that you know about this too. So it’s like, “Mom or Dad, Dad, Dad, can I have ice cream?” And they ask again, “Can I? Can I? Can I, please? It’s been so long, I’ll be good. Just give me $1 and I won’t ask again, please.” Yet, they continue to go and go and go and go. I mean, I know that my kids do this with ice cream. They do it with things for a fortnight — they say, “Let me buy this thing for fortnights and I won’t ask again.” Then a week later, they’re asking again.

When I’ve looked at some of the most successful businesses, largely due to their marketing, it’s been that they have regular and repeated strategies. They’re being executed — day after day or week after week.

If you use the example of postcards, which I’ve talked about quite a bit in the past, of kind of offline marketing or direct mail, that it’s much better to send one postcard to 1000 people four times than it is to send one postcard to 4000 people. Instinctively, a lot of people think that well, wouldn’t it be better if I get my message in front of 4000 people, rather than getting my message in front of 1000 people. The data, however, is always in favor of those 1000 people seeing your message four times and having better response rates. It’s this whole piece of repetition, and it states that people will start to respond to repetition.

So think about all those times with your kids, for example, where they’re asking for things I mean, even in the grocery store aisle, and it’s hard to refuse the repeated requests when they’re just continuously asking and asking. Why not take this same logic and apply this to your business? You want to make sure that whatever the marketing you’re executing, you have this structured out so that it’s part of a bigger campaign.

If you look back at the postcard example, one mailing just once, it’s really going to get very little attention for more than a minute, sometimes even a second — that’s if they even see it. And if you think about it, I mean, how many times have you seen the same TV commercial over and over and over, and then maybe one day it just finally clicked. However, you want to make sure that you’re continuously in front of your prospects. Now with this whole piece of this being part of a bigger campaign, that is really where things start to get exciting.

Let’s go back to the direct mail example, and let’s say you’re sending a postcard. Maybe you own a cleaning company, and you wanted to try marketing to a new neighborhood. Initially, you are going to say that you are only going to do this 1000 — 4 times. You structure it out maybe every two weeks. For two months, they’re going to get a postcard that’s going to be very similar, if not almost identical to the first one that you sent. So you’re already going to have a leg up against someone that is not doing it more than once. What it’s also doing to you is it’s giving you credibility.

It gives you this credibility because as people continue to see it, it shows that you’re investing in their time and their attention. After they see it more than once, and maybe they don’t need your product or your service right away, but they’ll often end up hanging on to that postcard, for example. Ultimately, that repetition will start to drive results. As you look at this as part of a larger campaign — when your results will start to skyrocket — is that if you then think of the postcard series as one kind of cog in a wheel, and then you look at the option of marketing to that same neighborhood, and also leveraging Facebook ads. Then you start to think “I’m going to market to that same neighborhood and I’m also going to leverage YouTube ads. Then I’m also going to make sure that those direct mail pieces, the four postcards go out. Maybe I’m even going to put up a billboard nearby, and at the same time I’m going to flyer that neighborhood.”

If there’s two identical businesses, similar products, and services, a similar type of brand story, so there’s really nothing that’s vastly different, prices are similar. The business that’s doing more marketing on a more regular basis will outperform the other business, assuming that everything else is equal. The business that’s taking this stuff much more seriously and knowing that it’s not short spurts that are going to allow you to win the race.

This is a marathon, not a sprint. You need to be doing this stuff day after day, after day. And if you focus on the rule of repetition, your income will rise. Get out there, take some action today.